Signing out of account, Standby…
Along with the surge in popularity, cryptocurrencies like Bitcoin and Ethereum also secured a bad rep for enormous energy consumption and carbon footprint emission. The good news is the industry has woken up early and has started taking a number of initiatives in this regard.
Cryptocurrencies like Bitcoin and Ethereum have come a long way since they were launched a decade ago. From being hailed as the currencies of the Internet, they have acquired the status of volatile digital assets. In the early years, mining Bitcoin required just a laptop but the same no longer remains a viable option now as the amount of power necessary to generate Bitcoin has exponentially gone up.
At present, Bitcoin, the world’s largest cryptocurrency, consumes an estimated 133.64 terawatt-hours of electricity annually—more than used by Argentina, a nation of 45 million people. Its biggest competitor, Ethereum, on the other hand, consumes about 78.01 terawatt-hours of electricity per year, which is comparable to that of Chile, according to Digiconomist’s Bitcoin and Ethereum Energy consumption Index.
This huge thirst for electricity comes from proof of work (PoW) consensus mechanism.The latter is a type of mining, wherein powerful computers race one another to process transactions, solving complex mathematical problems that require quintillions of numerical guesses a second. As a reward for this authentication service, miners receive new coins, providing a financial incentive to keep the computers running.
The growing concern over the harmful effect of crypto mining on the environment has led many countries to not just ban mining but outlaw this cryptocurrencies altogether. These include countries like Algeria, Bangladesh, Egypt, Iraq, Morocco, Oman, Qatar, Tunisia, and China. The latest country to ban crypto mining is Russia.But it’s not just countries who have taken note of the harmful impact that cryptocurrencies leave on the environment, but corporations too have. In May 2021, the electric car maker Tesla suspended vehicle purchases using Bitcoin due to climate change concerns, its CEO Elon Musk informed in a tweet. Musk had long been a supporter of cryptocurrency. After his tweet, Bitcoin fell by more than 10%.
However, the good news is the industry has woken up early and has started taking a number of initiatives in this regard. “Crypto industry is new and within 10 years of the existence of the Bitcoin people started working towards making crypto more sustainable and environmentally friendly. If we compare it with the other industries that have been in the business for a quite long time, they are yet to come up with fully eco-friendly alternatives. Take for instance the auto industry. Internal Combustion (IC) engines, responsible for high carbon emissions have existed since the 19th century but even today, the auto industry is yet to offer an environmentally friendly alternative that is scalable and accessible to the masses,” Sumit Gosh, CEO, Chingari App.
In 2021, Crypto Climate Accord, a private sector initiative to decarbonize the cryptocurrency sector by making it easier for blockchain projects to purchase offsets, was launched. So far more than 200 companies, blockchains, and individuals associated with the crypto, DeFi, energy, and technology sectors have signed up as its supporters. Here are some other initiatives. 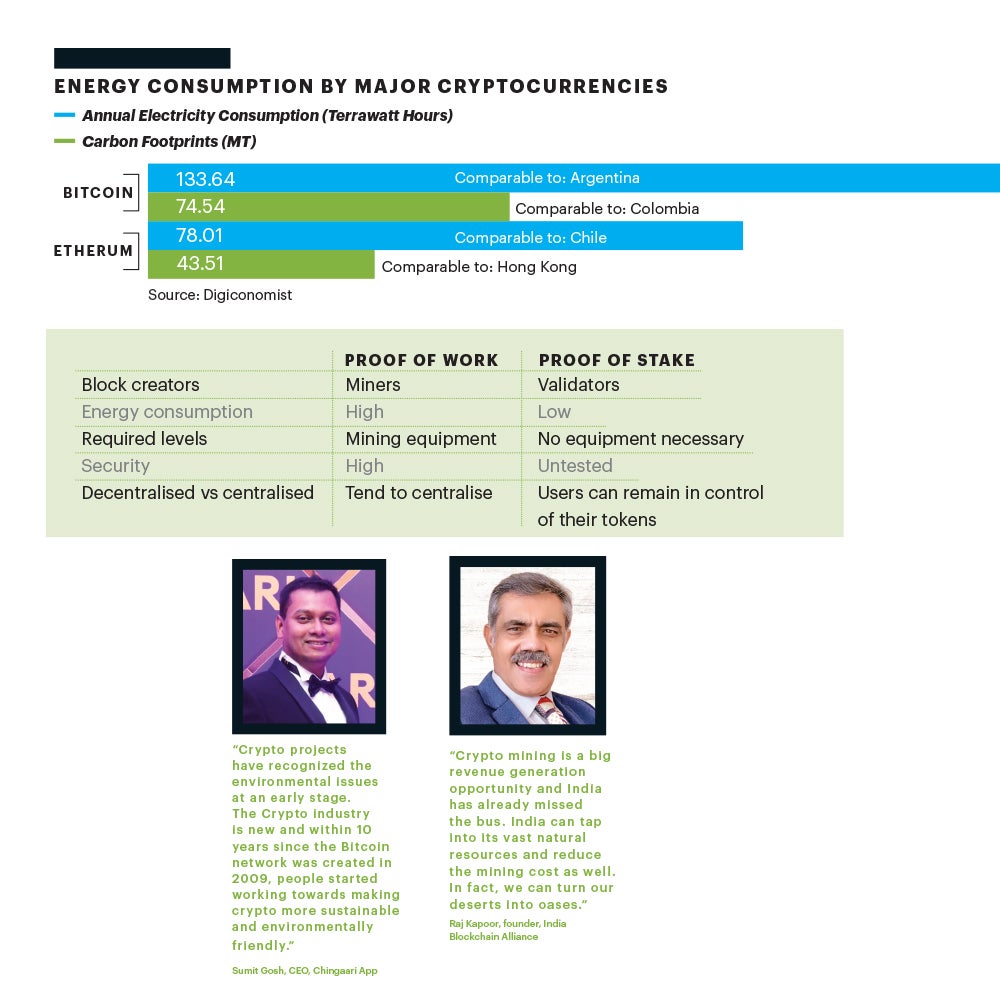