THE WOLF STREET REPORT
Imploded Stocks
Brick & Mortar
California Daydreamin’
Canada
Cars & Trucks
Commercial Property
Companies & Markets
Consumers
Credit Bubble
Energy
Europe’s Dilemmas
Federal Reserve
Housing Bubble 2
Inflation & Devaluation
Jobs
Trade
Transportation
It was thought that central banks, with their QE and interest-rate repression, had killed off any remaining bond vigilantes that used to hound governments that trafficked in reckless fiscal policies and high inflation rates. Under these conditions, bond vigilantes – big institutional investors that were tired of getting beaten up by government policies – refused to buy bonds at low yields, thereby pushing up interest rates and imposing high costs of borrowing as punishment. But maybe these dreaded but long-buried bond vigilantes are now rising from their unmarked graves as central banks have turned away from propping up bond markets, have turned to QT, and have started raising policy rates.
In the UK bond market, the bond vigilantes have come back to life with a vengeance after the new government announced a massive package of tax cuts for the rich (by scrapping the top income tax rate and cancelling an increase in corporate taxes, in the classic form of trickle-down economics) accompanied by a surge in spending due to very expensive energy subsidies for businesses and households. While inflation is already raging at around 10%.
The yield on the 10-year UK government bond (gilts) spiked by 44 basis points, to 4.28% at the moment, bringing the spike since Tuesday last week to 113 basis points, as bond prices plunged: 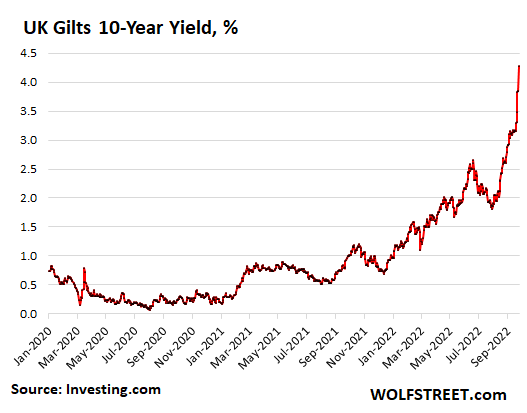 The one-year yield on UK gilts spiked by a monstrous 65 basis points today to 4.16% at the moment, bringing the spike that started on Tuesday to 121 basis points. These are huge gigantic multiday moves: 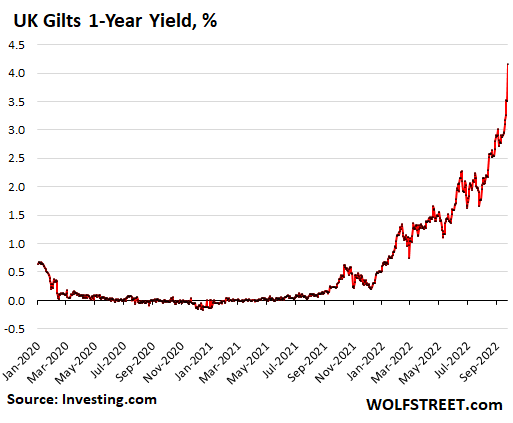 The British pound flash-crashed to a record low of $1.035 early this morning, after the plunge on Friday, before bouncing off to $1.07 at the moment, which is still down by 23% from mid-2021. Back in 2007, the pound was still trading above $2, before the financial crisis knocked it down to the $1.50 range.
The initial issue was the “Growth Plan” by new Prime Minister Liz Truss, whose details were announced at the end of last week. This was then made a lot worse with exemplary efficiency by finance minister Kwasi Kwarteng on Sunday when he talked to BBC about it.
He said to the world – practically daring the bond vigilantes to come out of their graves – when asked about the plunge of the pound and the spike in yields last week, that he wasn’t focused on market moves.
“As chancellor of the exchequer, I don’t comment on market movements,” he said. “What I am focused on is growing the economy and making sure that Britain is an attractive place to invest.”
Further tax cuts could be coming, he suggested, which didn’t help either. When challenged in the interview that the new policies of tax cuts and spending increases would further heat up the already red-hot inflation, he said that it was the responsibility of the Bank of England to deal with inflation, following the doctrine Truss had spelled out weeks earlier, that inflationary government policies amid the already worst inflation in decades were OK because it wasn’t the job of the government to deal with inflation, but the central bank’s job.
“They’re tasked to deal with inflation,” he said. “They don’t work in isolation, and that’s why I said that I will see the governor twice a week. And we share ideas, but of course, he’s completely independent.”
The Bank of England addressed this situation in a statement today, pointing out that it would not “hesitate” to hike rates “by as much as needed to return inflation to the 2% target”:
“The role of monetary policy is to ensure that demand does not get ahead of supply in a way that leads to more inflation over the medium term. As the MPC [the BoE’s Monetary Policy Committee] has made clear, it will make a full assessment at its next scheduled meeting of the impact on demand and inflation from the Government’s announcements, and the fall in sterling, and act accordingly. The MPC will not hesitate to change interest rates by as much as needed to return inflation to the 2% target sustainably in the medium term, in line with its remit.”
Last week prior to the announcement of the government’s economic plan, the BoE had raised its policy rate by 50 basis points to 2.25%. The next rate hike is due on November 3. It also confirmed QT, as laid out in August: it would reduce by nearly 10% its holdings of securities over the next 12 months.
The BoE now has a much more difficult challenge, as the government is throwing more fuel on inflation, and it might have to react with more and bigger rate hikes, and more QT, to try to slow this inflation.
And the bond market seems to be reacting to the simultaneous threats of much higher inflation than previously feared, fueled by these policies, and a much more vigorous inflation crackdown from the BoE with much higher interest rates for much longer than previously feared.
Enjoy reading WOLF STREET and want to support it? Using ad blockers – I totally get why – but want to support the site? You can donate. I appreciate it immensely. Click on the beer and iced-tea mug to find out how: