Wealthy people are everywhere, even though there are more of them in some places than others. That’s why the number of rich people in a country makes for a notable metric of economic development.
However, a new report on wealth in Africa reveals that just three countries hold most of the continent’s total wealth. In collaboration with Henley & Partners, New World Wealth, a South African research firm, has published the Africa Wealth Report for 2022.
South Africa, Egypt, and Nigeria, with $651 billion, $307 billion, and $228 billion in private wealth, respectively, account for $1.18 trillion, or 56% of Africa’s total wealth of $2.1 trillion. It’s important to note that this wealth is not the same as GDP, which is a monetary measure of the market value of all goods and services produced in a country during a specific period.
Africa’s wealthiest countries are South Africa, Egypt, Nigeria, Morocco, and Kenya. Morocco and Kenya hold private wealth worth $125 billion and $91 billion, respectively.
“From a global perspective, South Africa, Nigeria, and Egypt were among the top 15 nationalities in terms of the inquiries Henley & Partners received last year. South Africa was in 5th place globally, with a growth of 38% in 2021; Nigeria was in 7th place with growth of 15%; and Egypt was in 14th place with growth of 25%,” Dominic Volek, group head of private clients at Henley & Partners said in the report.
South Africa is home to over twice as many dollar millionaires as any other African country. Furthermore, South Africa has the two wealthiest cities on the continent, with Johannesburg being the richest, with a total private wealth of $239 billion. Cape Town comes in second, with a wealth of $131 billion. Cairo and Lagos are next, with $128 billion and $97 billion, respectively. 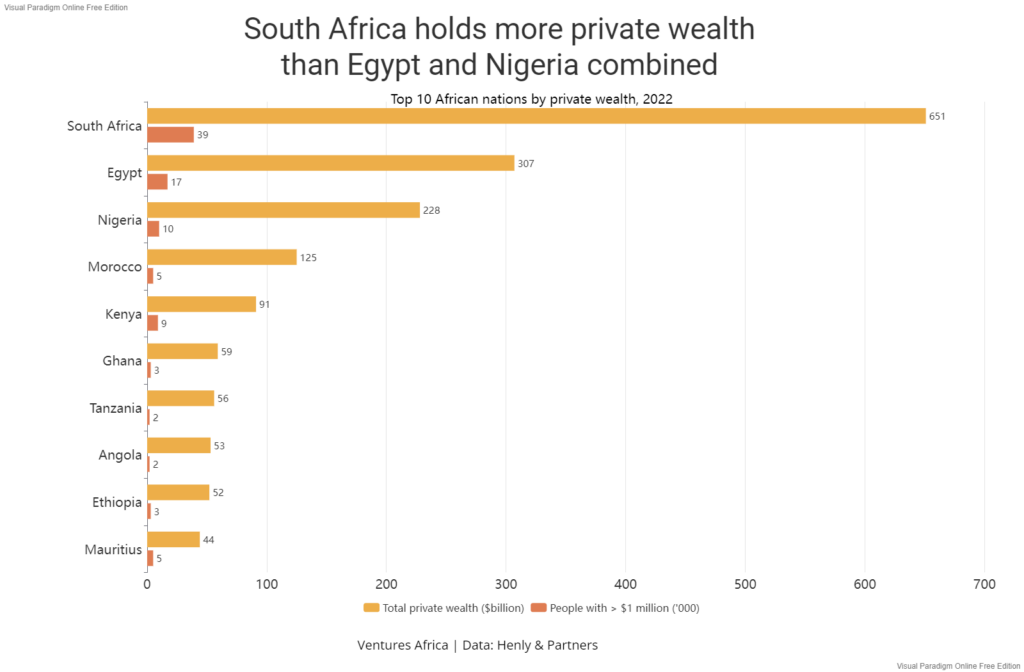 According to the survey, Africa has 136,000 high net worth individuals (people with net assets of $1 million or more), but only 6,700 people have more than $10 million. Also, the continent has only 21 billionaires, and 305 Africans own private property worth at least $100 million.
The top five cities where most dollar millionaires live are Johannesburg, Cairo, Cape Town, Lagos, and Nairobi at 16,000, 8,200, 6,900, 5,500, and 5,400, respectively.
While South Africa, Egypt, and Nigeria hold the top three spots, these countries aren’t getting wealthier. Wealth in these countries has declined by -12%, -23%, and 27%, respectively, leading to a 7% decline in Africa’s wealth growth since 2011. The study shows Africa’s highest wealth was recorded in 2012 at $2.4 trillion, while 2017 had the highest number of dollar millionaires at 148,000. That shows that Africa still has a disturbing wealth distribution problem.
But according to the firm’s South Africa managing partner, Amanda Smit, over the past decade, Mauritius was “the fastest growing wealth market in Africa in percentage growth terms, with a growth of 74% between 2011 and 2021.” The island nation also has the highest wealth per capita in Africa at $34,500. 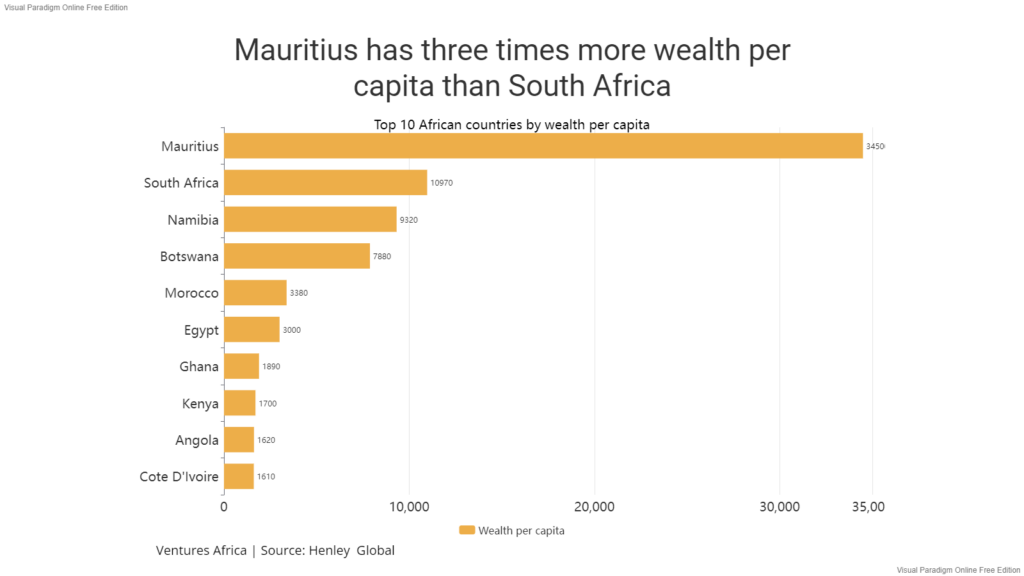 According to New World Wealth, Africa’s wealth will grow by 38% over the next decade, with “over 60% growth expected in Uganda and Rwanda by 2031, and over 50% in Kenya and Zambia.” It expects the technology and professional services sectors to champion this growth.
According to the report, “South Africa has the largest luxury market in Africa by revenue, followed by Kenya and Morocco.” Over the next decade, the African wealth management market is expected to grow by 60%.
Africa still has plenty of work to do to close its wealth gap. The tech and professional services sectors, which this report expects to lead Africa’s wealth growth, are highly dependent on the educational sector, which is still underfunded and underequipped.