Now the managing director at Camp + King’s Chicago office, Kristin Barbour has been in advertising for over two decades and has worked on many global brands, including McDonald’s, Kraft, Conagra and Chevrolet. Her ability to develop deep client relationships, assemble high-profile teams, and inspire ideas has been recognised at every major advertising award show. She also has an impressive history of earning real-world results, including record sales runs, the creation of one of the most successful global campaigns in McDonald’s history, and the revitalisation of brands in staid categories – shown most notably via her work in leading explosive growth for Conagra.
Speaking to LBB’s Ben Conway, Kristin discusses how she entered and developed in the advertising industry, how she shares Camp + King’s human connection “pixie dust” with clients, and the three qualities that her high school drama teacher used to describe her – which now encapsulate her leadership style: “Unaffected. Passion. Empathy.”

Kristin> I was a theatre kid, auditioning and performing in the local children’s theatre since elementary school. Any chance I could get to see live theatre performances were standout moments of creative inspiration for me. When I was little, it was ‘Annie’ at the Fisher Theater in Detroit and ‘A Chorus Line’, the very first show I saw on Broadway in NYC. My parents are Motown and jazz freaks, so while other teens were using their fake IDs to go to bars and shoot kamikazes, I was using mine to slip into the back alleys of some of Detroit’s most beloved music dens like Bert’s Market Place and Baker’s Keyboard Lounge.
The first ad that really stuck with me was one of the first print pieces Nike released in the ‘90s to run in female-targeted publications. I cut it out of my Vogue magazine with a straight cutter and put it in a frame that I kept on the wall of my room for all four years at [University of] Michigan. I remember thinking, ‘this is great writing. What an awesome message coming from a brand.’ 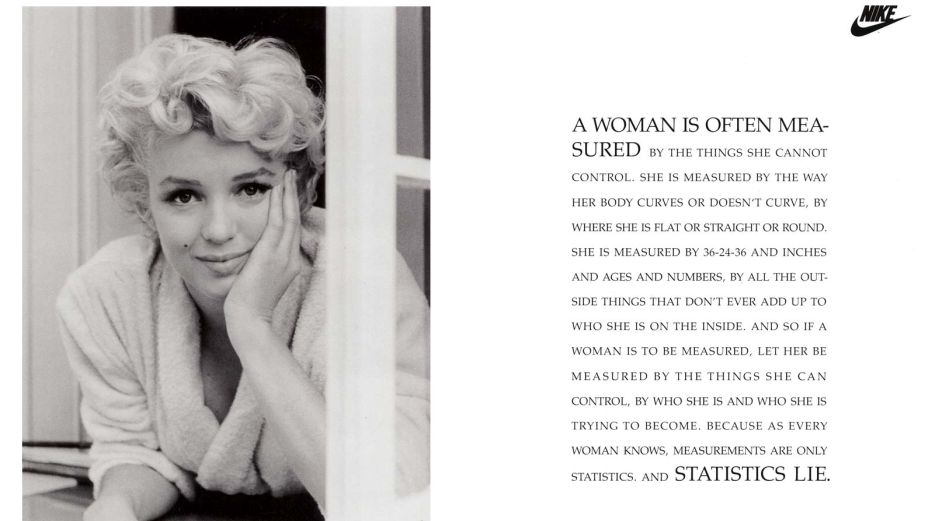 Kristin> In my senior year at Michigan, I took a class through the communications programme called ‘Writing for Advertising’. Rather than a professor, the class was taught by a female ECD who worked at a small, creative shop in Ann Arbor that produced award-winning automotive work for ‘The Big Three’ – Ford, Chevy and Chrysler. On the first day of class, she distributed an actual creative brief that was used at her agency and gave us creative assignments in teams of two. I was obsessed with the class and remember wanting to focus all my energy on her creative advertising assignments. At the end of the course, I thanked her for giving me the most inspiring class I had taken at Michigan, and then I told her what she really needed was an intern! That self-seized internship gave me my first taste of agency life. It was love at first sight.

Kristin> I learned that the survival rate of a great idea is directly correlated to forging deep, trust-based relationships with your clients.
“If they don’t like you, trust you, or respect you, don’t even bother pulling those boards outta the bag.” Dick Rogers, former president North America, DDB Worldwide
Throughout my career, the teams I’ve been a part of and the teams I now build genuinely understand the impact that the investment in the relationship has on the work.  Over the course of a few years, my team’s work, earning trust and credibility with our ConAgra clients, not only shifted their agency model from five rostered agencies to one consolidated partnership, but we also took them to Cannes for the first time ever for our Slim Jim film.

Kristin> I joined Camp + King five years ago. With our main office headquartered in San Francisco, one of our main goals was to plant a flag in Chicago and service clients east of the Rockies. To do that, we needed to win a piece of business significant enough to put us on the map outside of San Francisco. In 2019, I helped kick the door open for Camp + King’s Papa John’s pitch, as the brand was digging out of a reputational crisis. We won the pitch and the work we did for the brand, and the following business turnaround, earned Camp + King AdAge’s ‘Best Small Agency of the Year’.
I’m excited to leverage our differentiated offering in Chicago to continue to drive growth. Unlike other boutique shops, we don’t have two creative names on the door. Jamie King, a strategist by trade, and Roger Camp, a world-class creative talent, created what our clients describe as the best of both worlds – a strategic consultancy and creative boutique blended into one. That one-two punch permeates the work and the way that we collaborate with our clients, so together, we can unleash creativity as the most powerful tool in their business-building arsenal. 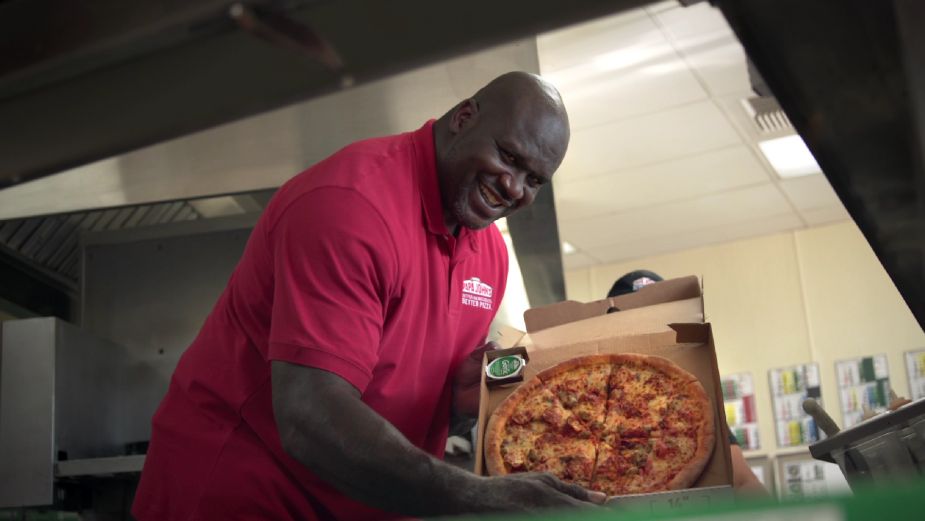 Kristin> Hire and retain great talent. Ensure our current clients view us as indispensable partners. Cultivate new business opportunities that propel the agency’s growth. Create a culture where talented and nice humans come together and have a hell of a lot of fun together building something remarkable.
A great leader puts the team first. The work is the win.
I remember all of us coming down from the room where the McDonald’s pitch was happening… our team leader, Don Hoffman, told all of us to pack our stuff because we were going to the Palm to celebrate. Somebody asked why we’d celebrate when we didn’t know the outcome of the pitch. He looked at everyone’s bloodshot eyes and said, ‘It was the best meeting I’ve ever been lucky enough to be a part of, and we would never have gotten here without the contributions from every one of you. We won. We may not know the outcome of the pitch. But trust me, this team already won.’

Kristin> When I was a junior in high school, Gael Barr, my high school drama teacher announced my name as the winner of ‘Best Supporting Actress’ for my role as Erma in the play ‘Picnic’. He gave me a golden piece of hardware that mimicked an Academy Award and a small handwritten card with a gold star embossed on the front. Three words were scribbled inside:
Unaffected. Passion. Empathy.
I didn’t quite know what to make of it. But what I kinda understood was that an adult who I truly admired, who wasn’t my Mom or my Dad, seemed to think I had some of the things that could take me somewhere in life. These are qualities today that I believe describe my leadership style.

Kristin> I’m in awe of the women who go to bat for and support other women. In a male-dominated industry – known for being a cut-throat, dog-eat-dog business – it is my advertising women, my circle of safety, who have never failed me. They have lifted me up and have my back always. My leadership idols are women who forge creative cultures and ideas by being courageous enough to make sacrifices for one another. It is these female leaders who know the secret that true greatness is unleashed when you work for the good of the whole rather than oneself.

Kristin> I was recruited to join the scrappy DDB Chicago pitch to steal back the McDonald’s account from Leo Burnett. Being a key member of the small, winning team, which included industry legends, was a career-defining moment that led to more than a decade of opportunities for me to demonstrate US and global brand leadership with one of the world’s most prestigious and beloved brands.
McDonald’s and ConAgra were two career-defining wins. With McDonald’s, I was a young account executive, deeply inspired by the leaders around me, and years later as an account lead, I guided our team to consolidate the entire ConAgra portfolio with DDB. Both experiences taught me one of the secrets to unlocking greatness at work and in life: when a group feels safe and trusted, and their will to do their very best matches their will to have each other’s backs, they will be unstoppable.

Kristin> Hands down, it’s the people. The funny, smart weirdos I’m lucky enough to be around each day recharge me and keep my cup full. When clients see a group of people who are so convicted about their work and each other, they feel inspired to think bigger, more flexibly, and with more openness to ideas. The energy is palpable and contagious. They want a piece of what we have. The pixie dust of our business is born of human connection. I love sprinkling it everywhere.
The biggest challenge I see is the disadvantage women still have in this industry compared to men. We must address the gender pay gap and teach women how to negotiate for the salaries they deserve. We need more female mentorship and motherhood support. We must hold companies accountable for creating cultures that are inclusive for women and tackle the unconscious biases around career management and promotion. As a mother of three driven, independent young women, I cannot and will not let these issues lie. We still have a lot of work to do.

Kristin> I agree with Keith Reinhard when he was once asked if the neverending changes in technology and data have created a need to redefine advertising and he said: “Advertising has always been about connecting brands with people and it still is”.
My prediction for the next big shift coming out of covid and the lack of control we feel in so many aspects of the world around us is that the AOR will have a great resurrection. Now more than ever, clients (and agencies alike) that win, will behave in a way that elevates the value of deep, enduring partnerships, particularly while so many other things around us remain uncertain.

Kristin> I love a loud dinner table and cooking a great meal for people I love. Spending any amount of time with my daughters, who have grown into three of the people I like most in the world. Travelling just about anywhere with my BFF/BF/husband of 24 years, who makes any trip, big or small, the greatest adventure ever. And getting cuddles from Shirley and Madge, our two Newfies who love, love, love, to love you up!
Tue, 20 Sep 2022 16:10:00 GMT
v8.4.3