Feverpitched
As most of my followers know, I have been writing on Seeking Alpha for over 12 years. I published my first article in 2010, and during that time I have written over 3,440 articles.
That’s a lot of words.
Back of the napkin, that translates into ~290 articles per year, or ~5.5 articles per week for ~12 years in a row,
I would have never imagined that I would become the most-followed writer on Seeking Alpha (with over 103,000 followers), but I suppose that I earned that prestigious award because of the dedication to writing.
That’s a long time for any writer to be pumping out content every single day, and to maintain the pace of quality, while always looking to uncover value within the REIT sector.
As many know, the “Great Recession” was the whole reason I’m now writing on Seeking Alpha.
Prior to 2010, I was a real estate developer in which I learned to concept of value creation literally from “the ground up.”
For over twenty-five years, I spent time in the trenches, learning how to generate value by developing stores for many national retailers, like Advance Auto (AAP), PetSmart, and Walmart (WMT).

Spartanburg Herald (May 18, 2002)
My first experience in a recession was in 1990, where I was just getting started as a young developer, and then in 2001, where I was beginning to churn out stores for retailers.
Both recessions lasted around eight months in duration.
Then, in 2008, the big one hit. Of course, I’m referring to the “great” one.
Around that time, I was working with some regional homebuilders, who had become a dominant player in the local market (Greenville-Spartanburg). We had a separate commercial division in which I oversaw ground-up development.
I remember walking into my business partner’s office around November 2007, and he informed me that he was having to reduce overhead considerably and liquidate assets.
With around 500 houses in various stages of construction, the process was quite challenging, especially because the lenders weren’t cooperating. It was utter chaos, and for the next 18 months (until June 2009) it was extremely stressful.
I landed a job in late 2009, so that I could generate income, and I worked extremely hard to get back on my feet.
Then, in 2010 I landed on the Seeking Alpha website and wrote my very first article.
Then I wrote another one…and another… and before I knew it, I had written 3,400 articles. Interestingly enough, since I started writing on Seeking Alpha, real estate investment trusts (“REITs”) – as measured by Vanguard Real Estate ETF (VNQ) – have grown by around 107%.

Yahoo Finance
Keep in mind, I used VNQ as the benchmark, which includes a broad basket of REITs, which are market-cap weighted.
By comparison, here’s how the mortgage-focused VanEck Vectors Mortgage REIT Income ETF (MORT) has (under) performed (-41%):

Yahoo Finance
A lot has changed over the last 12 years, most notably, the pandemic that all of us have experienced.
That’s what I call a “tipping point” if there ever was one.
So, now another recession is knocking at our door. Some argue we’re in one now, and, of course, the question everyone is asking is how REITs will perform over the next few months or quarters.
As Cohen & Steers explains:

“listed real estate tends to lead private real estate in both selloff and recovery during recessionary periods. Differences in the real-time pricing of listed REITs and private real estate can create significant short-term dislocations.
By understanding the leading and lagging behaviors of listed and private markets, real estate investors may be able to tactically allocate at different times across the two asset classes, seeking to take advantage of how markets have priced in current conditions.”

Cohen & Steers
Cohen & Steers believes we’re in a recession, as:
“growth has slowed for consecutive quarters to start the year, and while jobs and some other measures still show strength, central banks have embarked on one of the most aggressive rate-hike paths in history, pushing rates higher to forcibly slow down the economy.”
The fund manager believes that we’re facing “an average recession,” as measured against recessions over the past 100 years. Their base case is “a decrease of 2% to 3% in real global domestic product and a duration of about 12 months.”
Notably, Cohen & Steers suggests that “superior returns in real estate tend to follow recessionary periods” and the result, emerging from this challenging period, “may be some strong vintage returns across both real estate categories.”
Importantly, “pricing real estate is challenging in an environment where growth rates are decelerating, and financing costs are still increasing.” Yet,
“…valuations in real estate prices, as well as further expected declines in some sectors, should present attractive entry points.”

It wasn’t until 2009 that I dusted off the book and decided it was my time to become an intelligent REIT investor. I had basically gone through a nasty business partnership annulment and then the “Great” Recession, and it was time for me to make some big changes…a pivot!
So, after re-reading the book two or three times, I began pondering the concept of valuation, recognizing that my new habits of “forced conservatism” could provide me with a competitive advantage over other analysts and investors.
Ben Graham had experienced the Great Depression and he pointed out,
“The years of poverty since Father’s death had touched me only lightly. They had developed in my character a serious concern for money, a willingness to work hard for small sums, and an extreme conservatism in all my spending habits.”
So, I decided that I could help educate individual investors by continuously adhering to the lessons that I’ve learned from my missteps – namely, focusing on quality stocks, trusted management, diversification, and the margin of safety.
As I tell my close friends – who knew me before 2009 – the Great Recession (and preceding years) left a deep and lasting impression on me, much like the young Warren Buffett, who also experienced tough times:
“He emerged from those first hard years with an absolute drive to become very, very rich. He thought about it before he was five years old. And from that time on, he scarcely stopped thinking of it.”
Being broke is not fun, especially when you’ve enjoyed self-made wealth.
However, the Great Recession reshaped me into a highly determined investor with an instinctive understanding of value, with these words taped across my computer screen:
“Adversity is bitter, but its uses may be sweet. Our loss was great, but in the end, we could count great compensations.” Ben Graham:
Thank you for reading and commenting!
Join iREIT on Alpha today to get the most in-depth research that includes REITs, mREIT, Preferreds, BDCs, MLPs, ETFs, Banks, and we recently added Prop Tech SPACs to the lineup.
We recently added an all-new Ratings Tracker called iREIT Buy Zone to help members screen for value. Nothing to lose with our FREE 2-week trial. 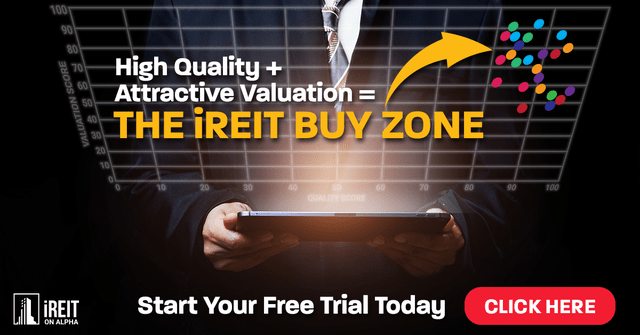 And this offer includes a 2-Week FREE TRIAL plus my FREE book.

This article was written by
Brad Thomas is the CEO of Wide Moat Research (“WMR”), a subscription-based publisher of financial information, serving over 6,000 investors around the world. WMR has a team of experienced multi-disciplined analysts covering all dividend categories, including REITs, MLPs, BDCs, and traditional C-Corps.
The WMR brands include: (1) The Intelligent REIT Investor (newsletter), (2) The Intelligent Dividend Investor (newsletter), (3) iREIT on Alpha (Seeking Alpha), and (4) The Dividend Kings (Seeking Alpha). Thomas is also the editor of The Forbes Real Estate Investor and the Property Chronicle North America.
Thomas has also been featured in Forbes Magazine, Kiplinger’s, US News & World Report, Money, NPR, Institutional Investor, GlobeStreet, CNN, Newsmax, and Fox. He is the #1 contributing analyst on Seeking Alpha in 2014, 2015, 2016, 2017, 2018, and 2019 (based on page views) and has over 102,000 followers (on Seeking Alpha). Thomas is also the author of The Intelligent REIT Investor Guide (Wiley).
Disclosure: I/we have a beneficial long position in the shares of AAP, ADC, AIRC, AMT, AVB, CCI, CTRE, DLR, EPRT, EQIX, FRT, FPI, GLPI, MAA, MPW, NTST, O, OHI, PLD, REG, SAFE, SPG, SRC, STAG, VICI, WPC either through stock ownership, options, or other derivatives. I wrote this article myself, and it expresses my own opinions. I am not receiving compensation for it (other than from Seeking Alpha). I have no business relationship with any company whose stock is mentioned in this article.
Additional disclosure: Author’s note: Brad Thomas is a Wall Street writer, which means he’s not always right with his predictions or recommendations. Since that also applies to his grammar, please excuse any typos you may find. Also, this article is free: Written and distributed only to assist in research while providing a forum for second-level thinking.